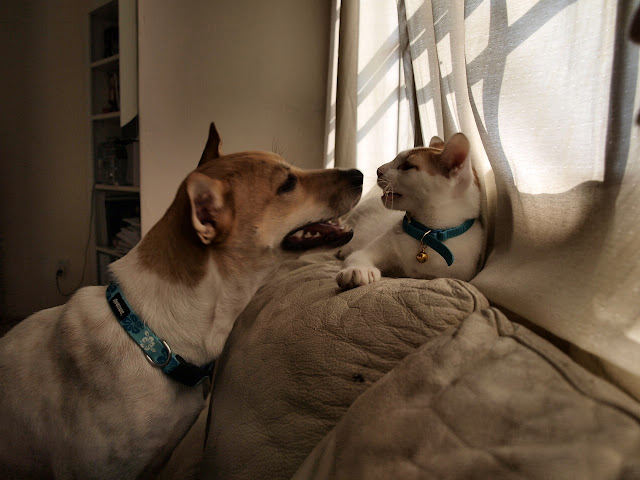 Does this count as progress?

i touched runty and stubbs!! i was sneaky about it but i did make contact!! does that count as progress? or is it just impatience on my part? i don't know.. but whatever it is, i was like "YESSSS!!!!!!!!! I AM THE CAT WHISPERER!!" super yay! i may have done a little dance as well but i won't go into detail on that horrific sight.

runty was first.. ok maybe petting runty doesn't count because she was actually asleep.. i stuck one finger in the cage and stroked her head. when she woke up and quickly whirled around in terror i pretended i just happened to be there and hadn't done anything wrong. she glared at me suspiciously, outraged and convinced that i had touched her.. but being a cat, she couldn't verbally accuse me of anything :) oh and she can't prove anything hahahahahaa!!

petting stubbs totally does count!! it happened last night! she's been communicating with me lately, meowing and asking for food, making eye contact without hissing so i thought i'd take things a step further. i put my hand near her. she backed away at first but cautiously came back and sniffed my fingertips. no hissing. excellent. then i changed her water and fed her dinner. as she ate i gently stroked her back and head. she cringed but wasn't super scared or angry and continued eating. she gave me a look that said "umm.. what are you doing? i'm not really ready for this.." but at least she didn't lash out at me. later when she wasn't eating, i tried to pet her again and she dashed off... so i guess i'm just going to keep pairing meal times with more and more human contact until she's more comfortable.

By the way, the lady that adopted Link and Dora (stubbs and runty's siblings). says that they're doing very well and have settled in nicely. Their mother has also become tamer and knows how to tell my parents when she's hungry. the whole family is taken care of. more updates soon. i still haven't taken photos of runty and stubbs but i'll do that this weekend. they're super cute.
Posted by havetailwillwag at 9:13 AM

Oh, yeah! That TOTALLY counts as progress! We're so excited that you're making progress with Runty and Stubbs, that Link and Dora are doing so well, and that even their mama is calming down. Cat whisperer, indeed! :)

Great job! I have a semi-feral seven month old cat foster right now, and she's slowly getting better, but it is taking awhile. But bribing her with canned cat food really helps. :-)